The most beautiful 50mm

Why is it called Rigid

The Leica Summicron Rigid 50mm f2 produced from 1956 to 1968 mainly in bayonet M mount with some rare LTM mount ever made. It has 10 blades aperture opening, filter thread is inherited from its predecessor in 39mm. The minimum focusing distance is still at 1 meter but in 1969 they changed it to 0.7m for the later version – Summicron version 3.

Its nickname “Rigid” because it was the first Summicron that has a fixed barrel. Its predecessor has collapsible barrel design. You may refer to my post on Summicron Collapsible Radioactive.

Basically there are 2 types of Summicron Rigid. Type 1 and Type 2 both of them has identical optics, same design and probably the only difference will be the coating and the appearance of its barrel, that’s why Type 1 lenses usually have more Leica glow than Type 2 and the later version is slightly sharper.

Type 1 lens barrel has narrow but curly scallop with a single scale showing meter or feet and Type 2 has relatively flat and wider focusing scallop and indicated with the dual scale with both meter and feet.

The first thing is the problem of haze, this lens is also very prone to having haze inside its elements and cleaning marks are common but not as severe as collapsible Summicron. The effect of haze will further lower the contrast of your lens, sharpness and has a certain impact on your lens performance with bright sunlight.

Secondly, separation is quite common in the Summicron Rigid and Dual range as well and the cause of that has many sayings, some said normally is because of heat or the way of storing the lens, some might refer to the heat causing the lens separation or the material used as glueing the lens elements together called Canada balsam.

I love how Summicron Rigid performs on different types of black and white film with great tonality. It has the charisma that no other Summicron can provide to me with that natural transition from black to mid-grey and to white with a moderate amount of sharpness and the contrast is adequate but not too high. Even though it is quite easy to flare and bokeh has a little squirl but not too obvious which makes the image look very pleasant on different types of photographs.

50mm focal length is my usual focal length to do street photography in Hong Kong. Because people are so sensitive to cameras here and I don’t want to include so many contexts in my shots and that’s why 50mm is my to-go option. It is relatively easier for me to capture little moments with this focal length and with Summicron rigid’s well-constructed body and given its weight of 340g only. It is such an ideal street roamer lens.

My first experience with Summicron Rigid was in 2014. At that time I only look at Summicron collapsible (Radioactive) or Summilux 50mm f1.4 V2 and seems I always missed out this Summicron Rigid and Dual Range (DR). I did some research then I decided to try this lens and looked for a type 1 for my first purchase.

Summicron Rigid is a lens that performs really well on both film and digital as well as a lens that does a great job on CMOS and CCD sensors because when you use some vintage lenses on Leica M10, they lose that essence. Maybe I should make a chart of lenses that I like to use it on CCD or CMOS and film.

If you ask me which Summicron to pick, I will definitely ask you to get a Summicron Rigid and you will love it. 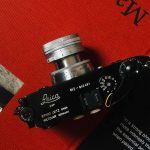