8 Years, 32 Film Cameras, 500+ rolls of films – Beginning of My Film Photography Journey
8 years ago in June 2010, I came across this Japanese drama called “Sunao ni Narenakute” talking about how social network brings people together. In the first scene of the first episode, the main character was staring at a camera displayed in a shop, and it looked absolutely beautiful.

My head kept replaying that same scene over and over again, and at the end, I decided to google it. I typed in “Leica M7” and there I was, my very first introduction to this German brand. Not just that, for someone who shoots with digital cameras for most of his life, it was a very sad surprise at the time to find out that it is an analog camera. Map of Prague when I travel with Film cameras 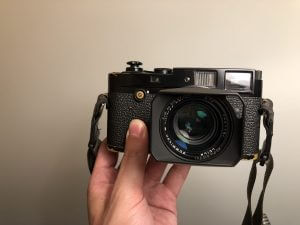 My First Film Camera
When someone is hooked to a camera brand, you know what’s next – I spent days and nights searching for the different Leica models.

To give you some background, I bought my first Canon 40D DSLR in 2009, then became super obsessedwith Bokeh, wanted to try out all the lenses and upgraded every single lense to premium Canon L prime and zoom lense. In less than a year, I decided to sell my entire Canon DSLR and Prime lenses family and give film camera a try with my first ever Leica, M6 with the famous 35mm f2 Summicron aka King of Bokeh. The shutter impressed me most, so quiet, stable and clean. But I felt that something was still missing, I kept asking myself “what, is this it, surely Leica has much more to offer other than its solid and simple design!?”

Sometimes, Simple Is Perfect
After a while, I fell in love with Lecia like everyone else for the very reason, its simplicity. It has distinct shutter dial, ISO dial, Aperture ring and film insertion process. The simplicity cleared my mind from the complex setting of DSLR. Of course, DSLR has its own benefits and its settings help professional photographers to achieve better results. At the time, my head was just fixed on taking nice pictures and wanted to leverage the best tools for best results. But after using Leica, it gave me a moment to step back and realize that mindset is equally important, if not more, than the gears you use. It’s all in your head. Begin the Journey with the First Roll Of Film
YouTube and Google taught me how to load a film. I can still remember my first roll of film – Black and White Ilford XP2. It marked the beginning of my film photography journey. I was dying to get the film developed after hitting the shutter 36 times. Phew. The relief I felt when I received the scanned copies from a local lab, I got all 36 shots exposed. They were definitely not appealing from a professional photography perspective but to me, they meant the world, a vivid memory that would stay with me for life. Even today, I am still in awe when I flip through my archive sheets for this collection, trying to recall the mood and thoughts when these shots were taken. Film Developing and Film Scanning by Myself
One day, my friend Franky said, “Hey Anson, let’s go shoot the Mardi Gras at Oxford Street”. Okay. I packed my film Leica with two 50mm lenses, hopped on the car, and off we go. After a quick ferry ride, we arrived at the Sydney City Centre.

In my bag there was Ilford HP5, Pan 400, Arista Premium 400 and Legacy Pro 400. These names shouldn’t be unfamiliar to you but unfortunately some have already discontinued. We shot from 2 to 9pm, then went home. Pouring, mixing and stirring, we got all the chemicals ready in the containers. Started with my favourite film developing app, Film Dev Chart, we began the process: develop, stop bath, fix, hypo clear. Twenty minutes later, I took the films out of the develop tank, hung it up and examined the picture one by one. I took a deep breath. I could have screwed this up in as many ways possible but yet I was so fearless. Self scanned and developed Ilford FP4 at ISO800, shot in Mardi Gras, Sydney 2011 In all honesty, scanning films is not my favourite hobby, but I enjoy previewing the images from the negatives. The long hours needed for dust removal and color toning completely outweigh my interest in film. However, having improved my workflow consistently, I am now used to scanning black and white images only. Trying to make actual prints in the darkroom

Second part of my Film Cameras and Gears Journey, please click the link below 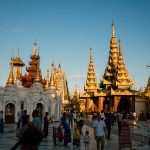 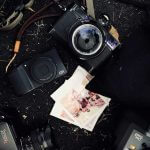