Before I try this film, I already have a few questions in mind. How does it compare with earlier Kodak Ektachrome films like E100G and E100VS? Secondly, compared with Fujifilm slides, which one is more appealing to me?

Since Ektachrome discontinued in 2012, I from time to time shot with some expired E100G but Fujifilm RDPIII became my luxury film that I will only use in my vacations. I was so excited when Kodak announced its return in December 2019. Because finally I can use Kodak’s colour reversal films again and their slide was once my favourite before they were discontinued and I shoot black and white film only after the slide film’s price went up.

I did my first roll in 2010. At that time, there were many alternatives, such as Kodachrome, Ektachrome, Fujifilm (Provia, Sensia, Velvia), Agfa and other brands. Now I regret not shooting Kodachrome before the lab closed and the remaining roll was still sitting on my shelf.

Frankly, I love the effect from slide film, the colour is true to original and the colour palette is always so comfortable to look at. It is so enjoyable to look at the film stripes every time when it returns from the lab. I especially love the uncanny tonality (white balance) at night when the green is actually something not visible to our human eyes and maybe that is the original colour that we cannot tell.

Slide films in general demand super accurate metering which means that we need to pay extra attention to the highlights and exposures on what we are capturing.

How does it compare with previous Ektachrome? Recently, I joined Clubhouse and had a chance to listen to Matt from Kodak Camera Club. He was talking about this new Ektachrome film. The film has to be hardened during production, to withstand higher processing temperature. And these parts were taken out after Kodak announced Ektachrome discontinuance. So when Ektachrome E100 comes back to life, they considered different ways to redo this process because the original parts are already in scrap.

Let’s talk about its characters. It performs well when there is adequate sunlight. You can imagine this film sucks huge amounts of sunlight and you can always easily feel the warmth and the touch from it. It has a powerful deep blue tone and this is the struggle that I have when I use it. I would describe the tonality tends to blue and green.

When it is underexposed (meter incorrectly), it has lower latitude than Fujifilm RDP III and Velvia. I shot a few rolls of E100 at box speed 100, some of them were underexposed so I am not sure what happened to this film.

But it really has an Interesting red tone, not vivid but muted, so it is something that is quite rare to find among existing film line ups. When E100 is shot indoor the green tone replicates the old 80s Japanese colour like how Greg Girard captured Hong Kong and Tokyo.

Honestly, I still prefer the old E100G and E100VS which gives me that punchy colour and saturation. They also have more magenta to balance out the overall tone as well as greater performance in daylight as their tone won’t be as cold as E100. Red colour is way sharper than E100.

Fujifilm Provia RDP III tends to be a better option for me to capture in more natural colour. If you like higher saturation maybe you should use Fujifilm Velvia 50 or 100. However, Kodak Slide film has better white balance because it has more warmth in its base.

I think Kodak brought back E100 is definitely a great addition to our film options and giving a strong confidence to our film community. I hope Kodak can maintain better cost management  and projections so that they can re-release films that were discontinued (Of course, I am dying to shoot Kodachrome!)

If you haven’t shot any colour reversal film before, I would highly recommend you to do so because every time I feel so happy to look at the film stripes as you can actually see the original colour.

Also, if you like the colour palette in the 80s or vintage look of film, I think shooting this film at night can replicate the essence of the old and cinematic look with the green and cool tone.

I can’t wait to shoot more Kodak E100 and see if I can find a better way to get better results out of it. I will share further tips to shoot slide film in a separate post. Stay tuned! 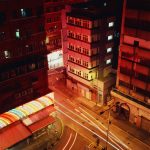