Introducing you to another essential film manufactured by Kodak – Ektar 100 – which is still available in the market. This film is well known for its vibrant colour and its e fine grain. Ektar 100 must not be a stranger to any film shooters; whether you are a specialist in street photography, landscape or portrait, you would love its extremely fine grain at ISO 100, and it goes perfectly well with old lenses or aspherical lenses.

Ektar 100 is a daylight balanced film, making it good at capturing exceptional saturation and vivid colours even at times when there is no strong sunlight. These characteristics allow Ektar 100 to stand out over films like Portra 400 (Fujifilm RDPIII ) or slide films (RVP100) which would give you greyish results instead. With this exact reason, this is always one of my “must bring” films when I go travelling, in particular to places like Europe or South East Asia, home to some of the world’s most beautiful and colourful temples and architectures.

When you pair this film with Leica lenses, the colour red and blue tend to pop out stronger than others, and are also naturally sharper. However at a few occasions when I had the exposure 1/3 or 2/3 stop lower, there was a shade of purple tint at the dark areas. Ektar 100 has outstanding fine grain structure, while other film types with low-ISO speed, such as Portra 160 and Fujifilm ISO100, have relatively higher grain structure than Ektar 100. So you can easily get a really nice result if you print it out.

Despite all of the benefits with this film, the one thing I strongly recommend you not to do is to push the film to ISO 400 because  this will cause the purple tint to appear at dark areas, making it to look as if it has added this Lomography filter, and also the image will be in higher contrast with saturated colours. You can take a look at the pictures below shot with Leica M2 and Summilux 35mm f1.4 asph FLE 11663 at the Pettah Market in Colombo, Sri Lanka. The film was shot 2 stops faster, set at ISO 400 (I was shooting other films at ISO 400 and forgot to switch the meter to ISO 100). All sample pictures are taken with the following gears: 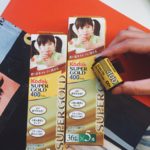 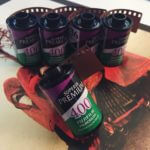